The Stone House Café sits where one of Reno’s first businesses began. It was 1876 when the town was newly established and Arlington Avenue was just a dusty horse and buggy lane. The 40 acres surrounding the structure began as a nursery with over 80 varieties of roses, berries and fruit trees. At the time, Washoe Valley had a flourishing apple and berry economy, shipping produce throughout the West. A decade later “Arlington Nursery Ranch” was sold and changed to a dairy. In 1918, the land was bought by a dentist and his wife who built the Craftsman/Bungalow style house we see today out of river rock found on the property. In 1945, it was sold again and turned back into Arlington Nursery, staying Reno’s largest and most prestigious for 35 years. In 1979, it was donated to the Junior League of Reno which still operates the Arlington Gardens Shopping Mall and Nursery. 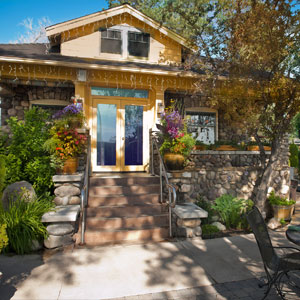 During one of Paul and Adele’s “retirements” from the restaurant business, she spotted the house. She pictured the perfect spot for a new eatery in this quaint historic stone house. She envisioned the tradition, the history and the patio which she knew would be the key. Just as Adele’s in Carson City played an integral role in the political affairs of the times, so would the Stone House have the very essence of the café society that once played so large a part in the affairs of Europe. She knew it would be a neighborhood spot that would attract diners from near and far. The Abowds spent a year remodeling it and opened its doors in 2005. Adele passed in 2004, just shy of seeing her vision come to fruition. But she was right. The atmosphere of the restaurant, the warmth, the company of people who know each other, the ease of conversation, the attention to detail and respect for the customer—all these add up to the delicious feeling that all the best European cafés possess. Add in a little earthy style to go along with the river rock and a little Bay Area feel with retro rock posters from the Bill Graham Presents days and you’ve got yourself the only place to be.